What is the BMW S1000RR and how does it compare to Japanese litre bikes? 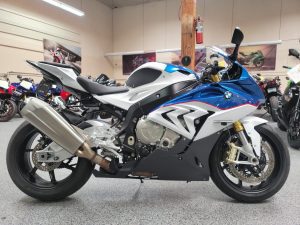 When it comes to sport bikes, the Japanese big four often come to mind : Honda, Kawasaki, Suzuki, and Yamaha. However, in recent years, the German manufacturer, BMW, introduced their S1000RR.

What does the S1000RR stand for?? Well, the “S” in this ridiculously powered German bike’s name stands for “sportbike”. Most can assume that the “1000” is an indication of enging size. Then, the “RR” means race replica like most RR’s. Most people already know this, but in case some don’t, now ya know!

How does it compare to Japanese litre bikes?

While comparatively slower to tip into lower speed corners than the BMW and Yamaha R1 due to its weight (206kg, 7kg heavier than the R1) and longer wheelbase than the other two bikes, the Kawasaki ZX-10R sits nicely in the faster turns settling well once the nose is pointing in the right direction. The ZX-10R is still impressively stable over the bumps and rumble strips as well as under hard acceleration thanks to its steering damper and refined front end feel. It’s as comfortable banked over as it is upright.

The GSX-R1000R was always at a slight disadvantage. In a perfect world, we’d have had the GSX-R1000 with less electronic wizardry and fewer weight-saving components, to better fare against the other trio. It’s compliant and smooth, but it lacks the agility of its rivals. The GSX-r1000R with its 203 kg wet weight is the lightest in the group. It also has the shortest wheelbase, and the least rake angle – meaning it should be the tip-in king of the crop and yet couldn’t get into to turns with the same efficiency of the others. On a positive note, the GSX-R has excellent mid-corner stability and edge grip, and the engine is a strong, consistent, linear performer.

The CBR1000RR has always been a little lower than its competitors, but as long as it takes advantage of its other strengths, such as ease of handling, it can be compared with the other motorcycle models, but the 2021 CBR1000RR-R Fireblade SP has completely changed this convention and redesigned. In other words, this actually means “HONDA is more powerful this time!”.It still might be too soon to say how well it does against it’s competitors…

The question is, which is the better liter bike?

Thats a tough one. The Honda CBR1000RR, Suzuki GSX R1000, Yamaha R1M, and Kawasaki ZX10RR all bring strong and furiously fast competition to the table.

All in all, we’d like to think that the Yamaha R1 is the closest possible rival to the BMW S1000RR.

The Yamaha R1 motorcycle comes with the most advanced electronic feature list among other litre-class Japanese bikes. The 998cc, four-cylinder engine is good for 200 HP and 112.4 Nm of torque. The engine on S1000RR is 999cc, producing 207 HP and 113 Nm of torque. The output comes at same rpm value for the power and different values for the torque.

Check out the BMW S1000RR’s we have in stock at : https://akmotorcycles.com/inventory/